The photographic world (as with many other categories) is riddled with the “what’s the best camera/gear” topic. I try not to get involved in these pointless discussions. In addition to that, there are more “philosophical” ones such as “it doesn’t matter what camera you use; it’s the photographer’s skill that counts”. This is a notion that is not fully justified. A tool must meet the expertise of the wielder in order to be effective. For example, Jean-Pierre Rampal never played on a $200 Bundy flute professionally, nor does James Galway. Likewise, Zuckerman, Perlman, Ma or any professional musician play on handmade, carefully crafted and highly capable instruments costing tens of thousands of dollars. The professional’s expertise will help them overcome difficiencies in “lesser quality” instruments, but they will truly never get the same results as with a fine instrument. But even so, there are professionals who are satisfied with more “mediocre” tools because they fit the way they work. I believe that this is the type of decision-making that everybody should use to pick out their tool for their craft. This opens up more possibilities since cost is not a determinant for the usability of the tool.

These days, I don’t usually tag image posts with EXIF data for the reason that the look I acheive in my images are camera agnostic. I do, however, realize that many of my images could look better if taken differently, either with lighting gear, location, technique, etc. I do remember how I felt and what was going through my mind for every image I’ve shot, especialy the weddings pictures. The level of attention and skill you need to get the once in a lifetime shots is very high. But I’ve also taken risks using “unconventional” gear for such important images.

So it was November 2012 that my notion of photography and how I wanted to photograph changed, in the form of a small point-n-shoot by Fujifilm called the X10. Though a point-n-shoot, Fujifilm regards it as a low-end professional tool. You can read my review of it here. It didn’t give me the bokehlicious images that the Canon 5D paired with the 50mm f1.2 or the 85mm f1.2 gave me, nor did it perform as fast as the Canon 7D or even as accurate, but it did simplify my approach of creating images. It was different. Not better. Not worse. Just different, and quite refreshing.

So, after a few years of contemplation, I ditched my Canon gear and replaced them with Fujifilm gear. Their cameras and lenses are much smaller, lighter and cheaper (you might think that I’m being redundant, since “smaller” implies “lighter”, but I urge you to wait a moment). They yield beautiful images that are different than the ones out of the Canon gear. They also behave differently, and in some cases, lack the features that I had with Canon.

Very recently, I’ve further devolved and acquired a Leica rangefinder. This camera has even less functionality than the Fujifilm, though they share many features. Zach Arias calls Fujifilm the “new Leica”, but I call Fujifilm the McDowell of the camera world. Body style, ISO range, shutter speed range, sync speed, lens aperture ranges, dial aesthetics match the Leica. Fujifilm clearly could have made a “better camera” but elected to be more “retro” than necessary. I like it! The next three images below show three of the four cameras that I own. The missing one is the Fujifilm X-E2 and the XF 35mm f1.4 lens. Both decided to go for a swim in the Gulf of Mexico and now they’re out for repairs. The X-T1 breaks the mould by being an SLR rather than a rangefinder styled camera. So what’s so “simple” about the X-T1? Well, all the “necessary settings” that you would make in order to create an image are at your fingertips in the form of manual dials: shutter, ISO and aperture. There’s no need to dig into the menus or switch modes (like the X10) in order to set it for a particular shooting environment.

Since this is not a comprehensive comparison, but more of an impressionistic article, I won’t go into great details of the pros and cons of each. I do, however, cover X10 to some detail in the aforementioned article. 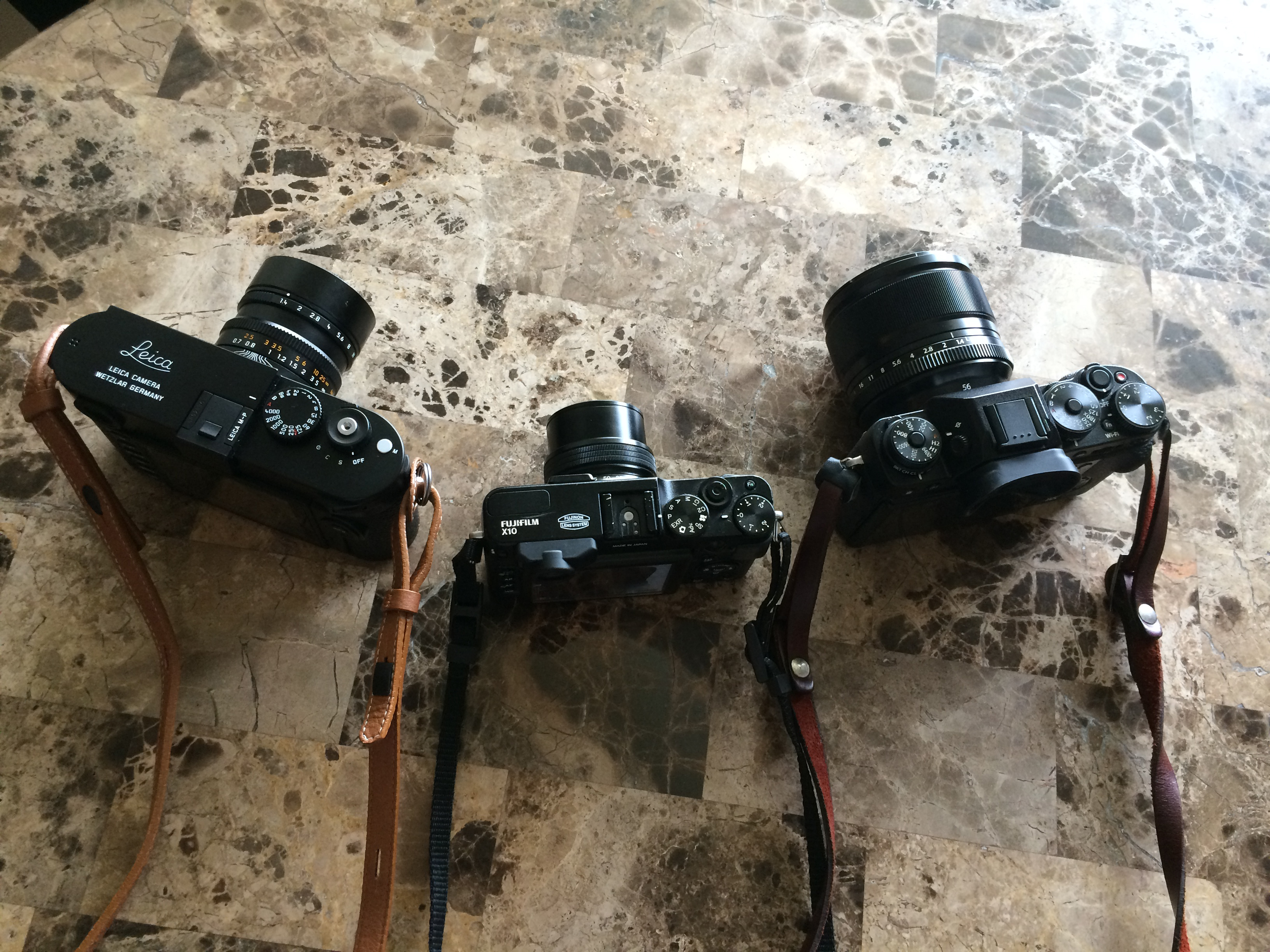 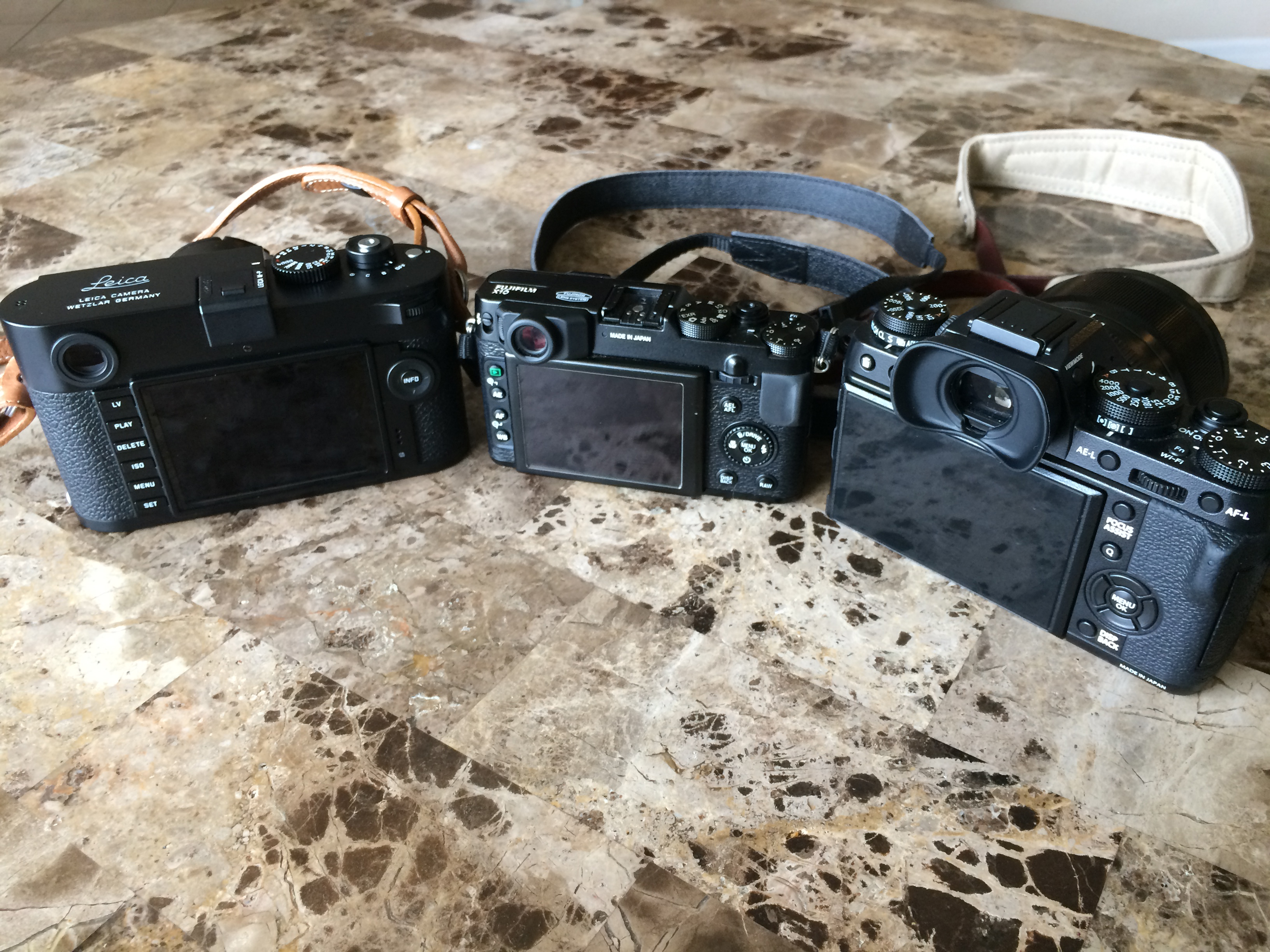 For those of you who may not be familar with the Leica brand, I have listed it’s difficiencies:

So why buy such an “impractical” camera, in this day and age?

Though I should have the instinct by now, shoot with such “limitations” makes me think, not only about my composition, but about the exposure and light itself. The X-T1 and the X-E2 both do a good job of exposure and light balance using their multi-zone mode. The Leica’s multi-zone acts more like an average metering mode and tries to light up the scene too evenly. I now use the center-weighted mode which provide nice light fall off from the subject into other areas of the scene.

I don’t have a specific B&W processing that I always use. I process on a per photo basis, but I do like the look of Kodak Tri-X film. For my Canon and Fujifilm images, I apply a Tri-X preset that I setup using examples that I forgot where I got. Currently, I use VSCO’s Tri-X preset, but the B&W Neutral setting of the M/M-P seem to be based on Tri-X. Not sure it was done purposely or not, but when I apply the Tri-X preset on the DNG, the look is almost identical to the JPEG. You can see it on the histogram. Below are two screen shots showing the histogram of the DNG after appying the preset and the one for the JPEG straight out of camera (SOOC). I noticed that the if I lower the blues and reds of the DNG, I can get the look closer to the JPEG. I also noticed that the JPEG has slightly smaller dimensions than the DNG. I haven’t researched this yet, but I believe that this is “normal” since the Fujis depict the same thing. Perhaps this is just another McDowell feature on Fuji’s part. 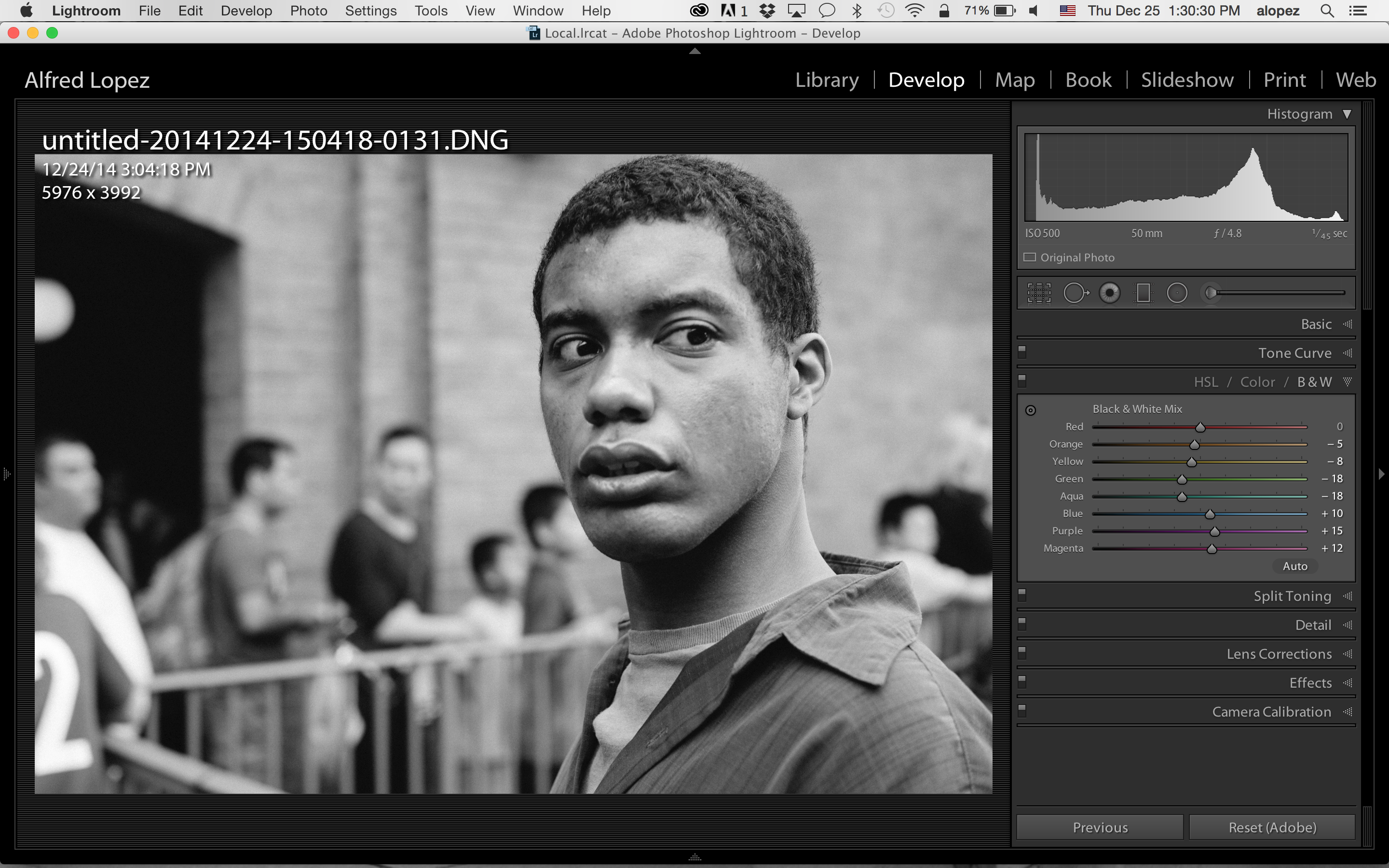 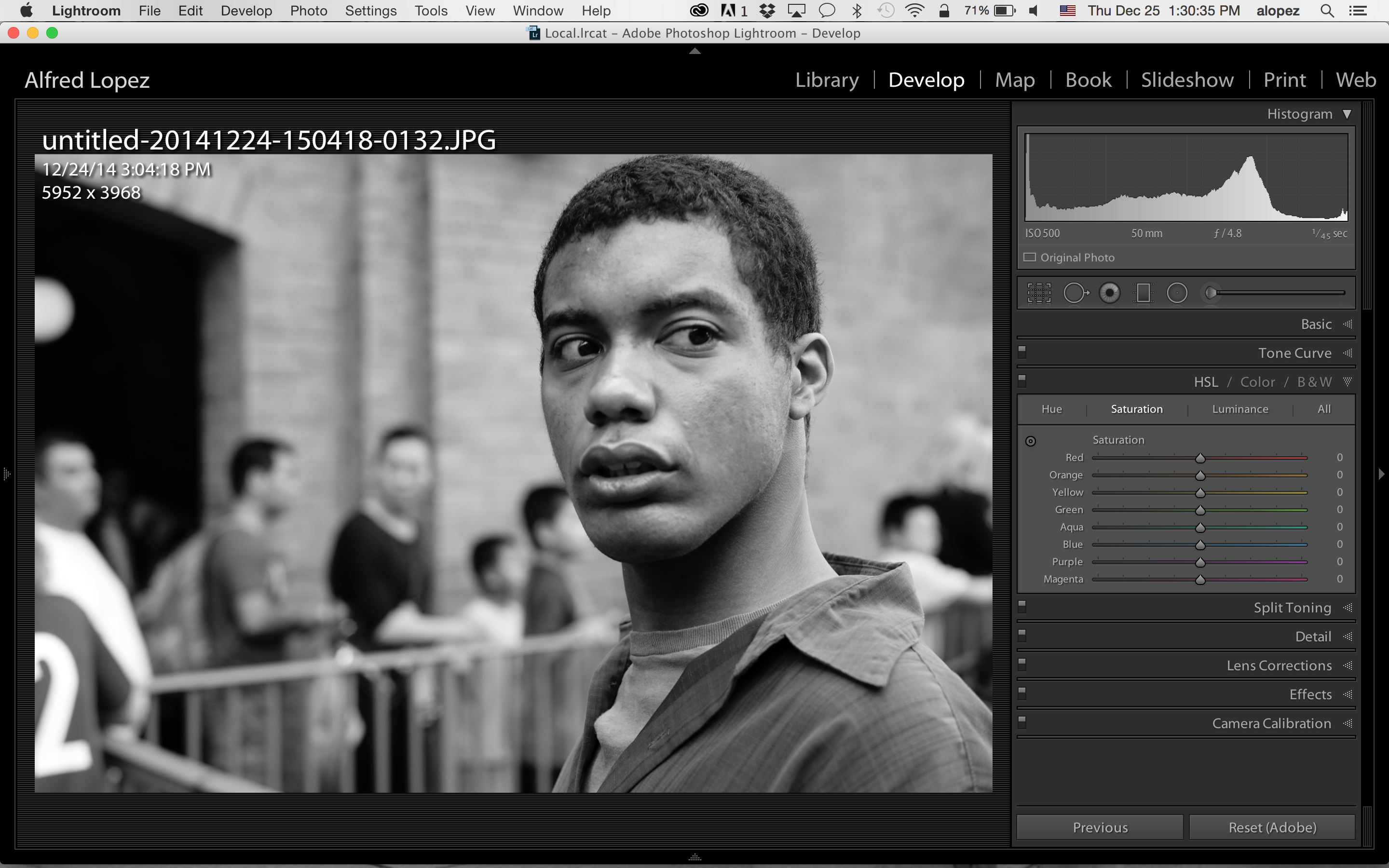 I’m a RAW shooter, but the JPEGs from the Leica look really good. I’ve played with the DNG files, but all have been converted to B&W. I wonder if the M Monochrom would have been a better purchase, but I know I will be needing color for my portraiture and weddings. Still, if the JPEGs look good for a shoot, I will definitely use them as a deliverable. Or I can simply apply the preset or the VSCO Leica M Tri-X camera profile.

Do I call this a devolution? An evolution? No. I call this “being at peace with your photography”. I’ve only had it for a few weeks and I’m still discovering what it can do. So if any reader who are leicaphiles sees an error in my representation, but let me know. That said, the images out of the Leica may not necessarily be “better” or “worse”; they are just different. Besides, “better” and “worse” are relative terms. I’m enjoying interacting with the Leica, and, in turn, it gives me the images that I expect. Will I give up my Fujis? No. They will be my workhorses. My purpose for the M is as a fine art tool. A little pretentious? Yes, I know, but you really have to hold and use one to understand.