Carline and I started our vacation in Oslo, Norway. We were only here for one day, so we had to make the best of the time we had to visit the city. The first thing we noticed is how quiet the airport is. Before taking the shuttle to our hotel, we sat and had tea, coffee and two croissants with “chocolate” (Nutella) in them. We were talking about the stillness and the feeling of calm, when an American couple walked by talking and cutting through the silence. They were the only one we could hear. And then we realized what makes our airports so stressful.

It was raining and there wasn’t much to see from the shuttle bus on our way to the hotel: Park Inn (Radisson) in Trosterud. Our room was quite small, efficient and quite comfortable. We pride ourselves for being up to date with technology and other trends, but we weren’t prepared for “efficiency”…

We freshened up and after a ten minute walk (five, if we were fit), we arrived at the Metro station. The efficiency theme continued here and, if nothing else, Oslo’s metro system can be the poster child for efficiency and timeliness.

We took the #2 train (orange line) to the National Theatre, but one stop before, the metro ticket checkers entered the train to check tickets. We only purchased one ticket since the machine refused to give us more than one. Carline fessed up and said she didn’t have one. We were escorted off the train (yeah, we’re more thug than you). After being questioned about whether or not Carline was a visitor to the country and checking her passport, we made good and bought another ticket and got back on the train. Lesson learned. I guess we angered Odin.

We planned to ride the “Hop on/off” tour bus, which we saw parked waiting for unsuspecting tourists to arrive. We had a few minutes before take off, so Carline bought tickets (plural) on the bus while I walked to a nearby 7-11 to get refreshments. These tour buses go round and round the city stopping at several tourist point where the rider would “hop off” and visit the spot and “hop [back] on” the next bus. Buses run about thirty minutes apart. Without going into detail, we stopped at the Vigeland Park, where we saw very disturbed statues (they weren’t “disturbing” to us, just disturbed). Since it was late, we didn’t have much time so we stayed long enough to wait for the next bus to arrive. We didn’t visit the Vigeland Museum. One thing I must mentioned for my photo-homies is the gear that I was carrying. I decided to go on vacation with one camera this time around. I chose to carry the Leica and two lenses: my Summilux 50mm and a Zeiss 21mm f2.8 for those grandiose views.

At Vigeland Park, I noticed that the rangefinder was a bit off. This was only evident on far away subjects (more than fifty feet) when the lens is set to infinity. The focusing patches didn’t align all the way. The photo overlooking the Park was really a test shot. 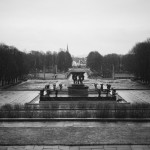 As you can see, things are in focus, so the lens is still working, but I may focus incorrectly on closer subjects because of erroneous information from the rangefinder. This led me to shoot stopped down a bit to ensure sharpness. The photo of Carline in front of the the male statues holding up a bowl is in focus taken stopped down to f2 (I didn’t bother identifying any of the statues). 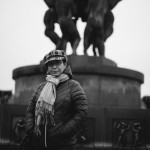 We stopped at two other places: the Kon-Tiki museum and the Opera House.

From the Opera House, we took a lengthy stroll around the area and decided to have a descent dinner before heading back to the hotel. After a very restful night, we headed onto Athens. We truly enjoyed Oslo with its calm, modern and organized look and feel. We’re planning on returning, perhaps during the summer months.