Looking Back at Sam Abell

This past weekend, I decided to take some time for myself and do a little street photography. After easily finding a parking along Boston’s Public Garden (not an easy thing to do, usually), I stepped out of the car and saw my first shot: a woman, on the other side of the park fence, sitting on one of the benches, facing the park. It was a bit impulsive, and, as my friend Matt Gore and I call them, “low-hanging fruit”. It was as if I was doing street photography for the first time. I usually wait to see something that is more “purposeful” than something that has a potential, but I took a few frames of this woman, and then I was  reminded of something that Sam Abell said in his talk “The Life of a Photograph”. He mentions (and teaches) the importance of taking pictures of people from behind and from the side:

If you take up the study of people from the back or from the side, you will see that they are expressive; expressive of character, of attitude, of mood, of feeling expressive of many important human emotions and their life itself. Also, you don’t bother them. You don’t invade their space…It just takes more astuteness, I think. More touch, you might say, or more diplomacy, or more understanding of human character to photograph a figure from the back and make it work…[the figure] seems more “universal”…more of a life to the photograph.

— Sam Abell, “The Life of a Photograph”

Before I continue, I want to make you aware of two aspects of Sam Abell’s photography: 1) he shoots in “layers” and micro-framing, and 2) he doesn’t edit his photographs. One must take the last point with a grain of salt. He admits that he shoots his Canon cameras (an important point, it seems) in “P” mode, which let’s the camera decide the “best settings” for the scene. He, does, however, override the exposure with the exposure compensation dial. I will probably have a follow up post on this, because of its, somewhat, controversial nature, but I can only assume that he shoots in JPEG mode, because shooting in RAW requires one to use something like Lightroom or Photoshop to, at least, convert the image into something viewable, which he claims he does not use. Though I don’t fully agree with this assessment, in the spirit of Abell-ness all photographs presented in this post are either JPEGs straight from the camera or Digital NeGative (DNG/RAW) files where the JPEG is non-existent. I shoot both RAW and JPEG simultaneously. In color on the Fujifilm cameras and monochrome on the Leica. I like the color rendition of the Fuji and I like the monochrome rendition of the Leica. Since I don’t use the exposure compensation dial on the camera, I do the same compensation using software, but these shots are unaltered.

I decided to follow in Abell’s footsteps and try to capture that “importance” that he describes, but I don’t usually shoot in a “layered” fashion. For Abell, a photo has a back, middle and front layer, therefore, he shoots with a deep depth of field. I like shooting with more shallow depth of field, unless I find that the background contributes to the story. This idea is something that both Mr. Abell and I agree with, but in his case, he strives to always include the back. That’s his starting point in composing a picture.

I also photograph creature other than humans, as depicted in the above photograph of a French Bulldog watching his owners at a distance. One can easily see that the dog wants to be with everybody else. Perhaps the people he’s watching aren’t even its owners. But the interests are clear. The interests is easily seen as dogs don’t lie. But humans can mask their meanings. In the back, you can see somewhat of a jovial interaction between the humans. You get to feel as lonely as the dog.

In this next photo, we have a girl reading a book. It is not obvious in this photograph that she’s doing so, but it is obvious that she’s looking down at something on her lap, per se. As with Abell’s photograph of a Native American woman weaving something with her back at the camera, we what they are doing, but we have no insight into anything else. So this photograph doesn’t have the elements of expression. So, what are we missing? We know that expression is more facial than bodily. The face is usually the definitive notion in the interpretation. In other words, faces depict the expression, absolutely, which other body parts, like hands, enhance or accentuates it. For example, if I have a stoic facial expression, but I have a fist raised, an observer wouldn’t be sure of my true intent. But if I have an angry countenance, then the first makes sense. In fact, the raised fist would elevate the anger to something stronger. One can only guess with bodily gestures. Which maintains the mystery of the photograph.

This is the approach that I took with this next photo: 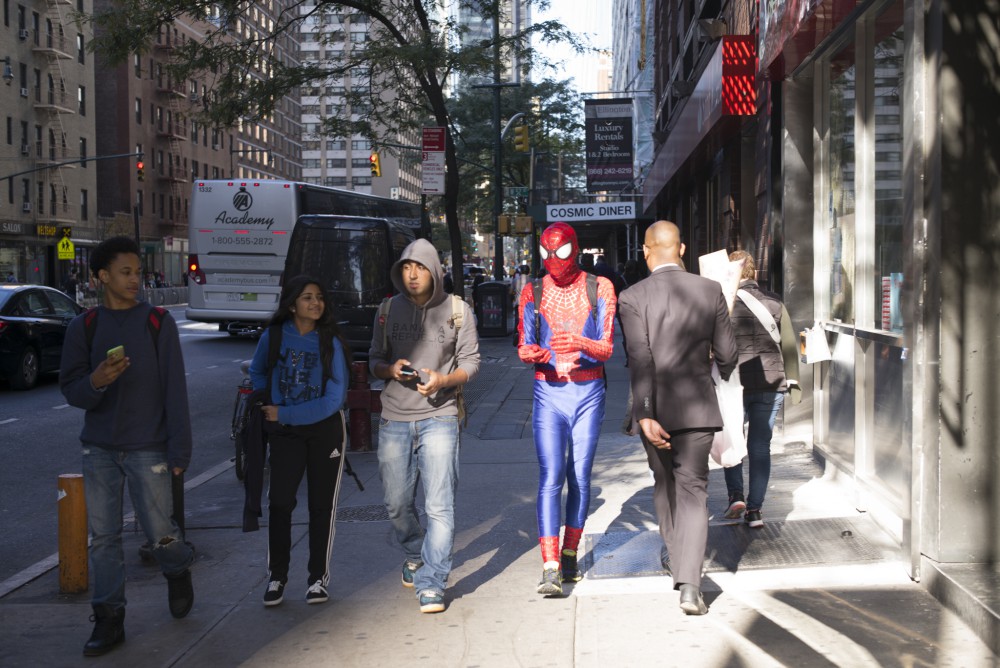 Spidey has not facial expression, so I relied on his hands to generate it. I believe that he’s explaining or making a point to his friends. This is probably a true Abell-esque photo: the back is in focus (the buildings) and adds to the front layer, putting the subjects in an absolutely identifiable space. Then, as a bonus, the middle layer (store and restaurant signs) adds to the element of the subjects: Spider-Man, being a superhero, who’s been into space, may have just come out of the “Cosmic Diner” that appears behind him.[1]I consider this photo, also Meyerowitz-ian, akin to Joel Meyerowitz’s photography.

I continued my search for interesting “backs” with, maybe, some micro-framing or two. This reminded me of a photograph that I took several weeks ago where I intentionally put micro-framing to work as well as shooting people from behind[2]Mind you, Sam Abell doesn’t just shoot people’s backs; I just made it an exercise for the day.

In the above photograph, I micro-framed a man smoking a cigerette outside the Boston Leica Store using one of their display shelves. The man actually framed himself. He stood right in front of it. I was actually waiting for a nice billow of smoke, but he never created one and he moved on soon after I took the shot. What does this photo say about the man? I know that this photo is not “purposeful”. It’s simply something novel to look at and doesn’t really have any substance. The same can be said about this next photo:

There is one key difference, though: since the man is “placed” in the scene, the photograph now has a mood to it. Not exactly the type of mood Abell speaks of, but there’s definitely one there. Usually, Sam Abell sets up the scene by taking a shot of the empty scene then waiting for something to happen. I take more of a decisive approach. So I wait until the scene developes, then I press the shutter, so I cannot compare this scene with and without the man in it, but one could tell that just with the man’s mere existance, this scene takes on a whole different, and fuller, meaning. It completes the scene, even though we don’t have the expression from the man.

The above photo is the last of three frames. As I took each shot I got closer and closer. I would have have taken a fourth shot had a family not sat on the unoccupied section of the bench. I found the young woman’s body language interesting. Obviously, there’s interest from the man, but it almost seems that she is not fully onboard with that. I also waited to, possibly, see a little of her face in order to glean an expression from it.

I’ve taken the approach of photographing people from behind and from the side most of my time as a photographer, even in situations that people are aware of my presence, like at weddings.

There were times walking in the park that a scene was too complex to make meaning of, but there was something that I wanted to capture. Not all photograph can be taken. It is a good practice to refrain from created a photo that may not have the desired meaning.

Photographing children is difficult these days, and it’s sad because one can create amazingly interesting photos. Children are very expressive, even when they are stoic. The above photo was difficult because, clearly, the girl is not the only subject. She’s not separated from everyone else. Sam Abell would have worked it this way, but I believe that the back of the scene didn’t add anything to the photo. I waited for some signs of expression as seen from behind, but her father sat next to her and I got the following photo instead:

I just wish I could have gotten closer without rousing suspicion. Obviously, I could have used a longer lens, but I only carry one lens when I shoot the streets. Sam Abell made it a point to carry a 28mm and a 90mm, but I think that was in his Leica days. Now he probably carries a wide to medium telephoto zoom.

I spent the rest of the day snapping at what I thought had meaning, but I’m not sure I succeeded. Perhaps Mr. Abell can chime in, if he’s reading this post. I did, however, looked at my archives for such a photo, at a time when I did not know about Sam Abell.

This shot of my son watching my wife in a hotel was taken with a Canon 5D Mk II and the EF 50mm f1.4. Clearly it needs some white balancing. This is from the RAW file. I did not shoot JPEG back then, because I didn’t like how the camera rendered them, so I took that task upon myself.

I also love shooting our son from behind. He is so expressive in his quiet nature. Here we see him preparing for a flight that he has waited for. He was once obsessed with Las Vegas. Until this day, we don’t know why. But, by the same token, I like to photograph him from the side to get a glimpse of his expression… 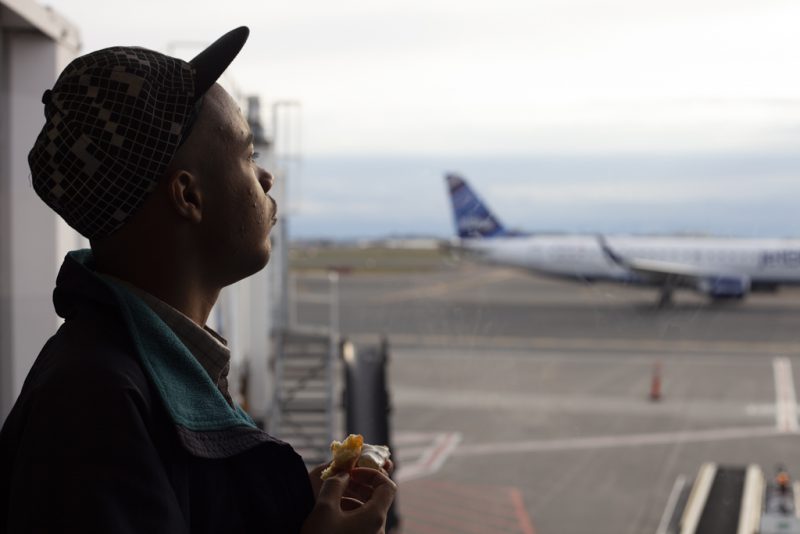 Look further into my archives, I see that I prefer the sides of people more so than their backs…

Even dogs have an expression…

For the rest of the photographs, I’ll let you tell the story…