This year I finally decided to attend the PhotoPlus convention that’s held in New York City. I say finally because every year for the past few years, my friend, Matt Gore would ask me if I will attend, and I always decline for some reason or another. Since I now live in Massachusetts, I thought that it would be nice to drive down to NYC for the weekend and, perhaps, find some inspiration. I was also taking advantage of the fact that, essentially, I would only have to pay for gas since I could crash at my daughter’s apartment (thanks Farah!). Call me cheap, if you want.

PhotoPlus took place from October 21st through the 24th. I only attended it on the 23rd and 24th. My objective was to collect as many chotskies and attend as many free lectures as I could. Also, I wanted to try out some new lenses for Leica and Fuji, so I took the Leica and the Fuji X-E2 with me. Outside the Javits Center, where the convention took place, photographers from all walks of life wore their “best” gear like badges that announced their accomplishments. Each one checking out the other to see where they are in the pecking order. I had to fight my disdain for this type of competitiveness and come to the realization that I’m doing something for myself. Perhaps it was all in my head anyway.

When I finally entered the hall, I wasn’t impressed nor inspired; I was overwhelmed. Seeing all the beautiful work of well-known photographers (both dead and alive) made me consider and re-evaluate my own work. I concluded that I still had much to learn.

I walked the circuit and tried a few lenses for the Fuji. The most interesting one was a 35mm f0.95 X Mount made by the Chinese company Mitakon. I also tried the Zeiss Distagon T 35mm f1.4 for M mount as well as the C Sonnar T 50mm f1.5. Amazingly, the lenses produce the “Leica look”. The Leica and Zeiss 50mm produced indistinguishable results. Which is favorable since Zeiss lenses are much cheaper than their Leica counterparts. My interest in self-printing led me to the Canson paper booth. I spent about 30 minutes learning about their different papers and their intended uses. I also played with the Leica S medium format camera and the new Leica SL, which seems to be a cross between the Leica M and the S. Finally, I got a lecture on cine lenses for the Leica system. Nice lenses. Outrageous prices!

My take of PhotoPlus is an even that benefits those who are looking to buy current gear at discounted prices. Often 40% or more discount. And that’s for those who just go and attend the expo. There are paid classes covering a multitude of subjects.

Taking It To The Streets

Matt and I finally met up a few hours later. After doing the circuit, we went out for lunch (Pakistani) and then returned to Javits. We stood and listened to Sam Abell speak. Though we caught the latter half of it, his words and his imagery were inspiring and instructional. It also made me realize that I have been doing a “few things right”, even though I just regarded them as “how I like to take pictures”. I saw a few of my photos on the screen he was presenting on (not literally, but similarly). It was nice to get some sort of confirmation as far as technique goes. In other words, defining how I take pictures as opposed to what I take pictures of. “Inspiration” was a topic of discussion between Matt and me, so we decided that we would go out and find some.

We spent the rest of the afternoon and most of the following day exploring the city. Even though we share a fair amount of photographic ideology, our shooting styles, our choice of subjects, and compositional styles were different, at least, when it came to street photography. 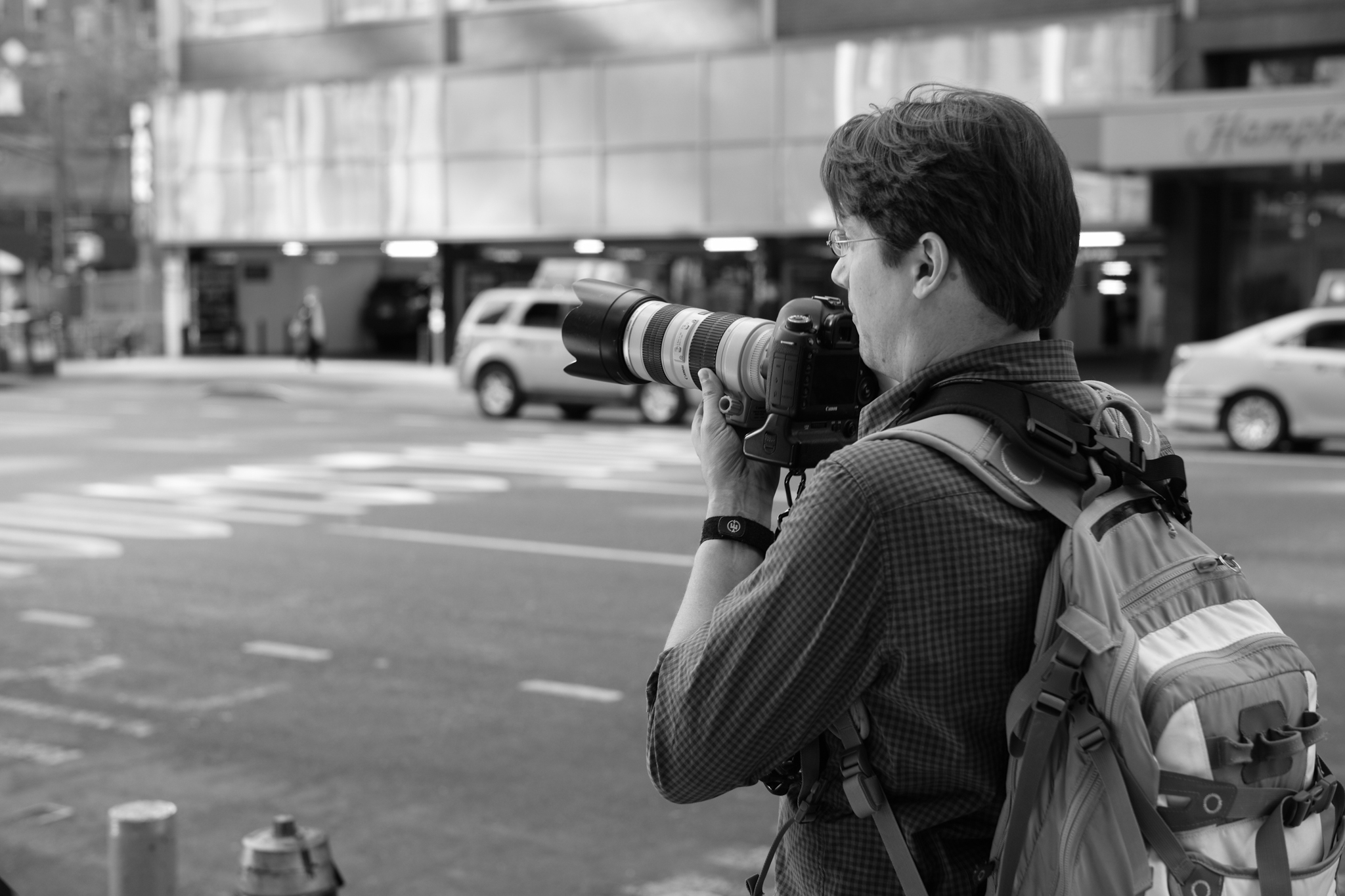 The tele zoom afforded Matt discreteness by keeping a greater distance to the subject or scene, while the Leica forced me to get much closer, but still have some level of discreteness by the size of the camera and lens. The manual lens allowed me to pre-focus at times so that I could be ready to press the shutter when needed. Once such scene where this was the case was in Chinatown where a father and daughter (I assume) were possibly on their way to a costume party, judging by the little girl’s dress. The father stood motionless looking at his phone while the little girl was restless. I stood about five feet from them while Matt shot from twenty to twenty-five feet. We captured two totally different looks of the same scene. I captured a strange, almost ghostly expression from the little girl, while Matt captured her playful nature. 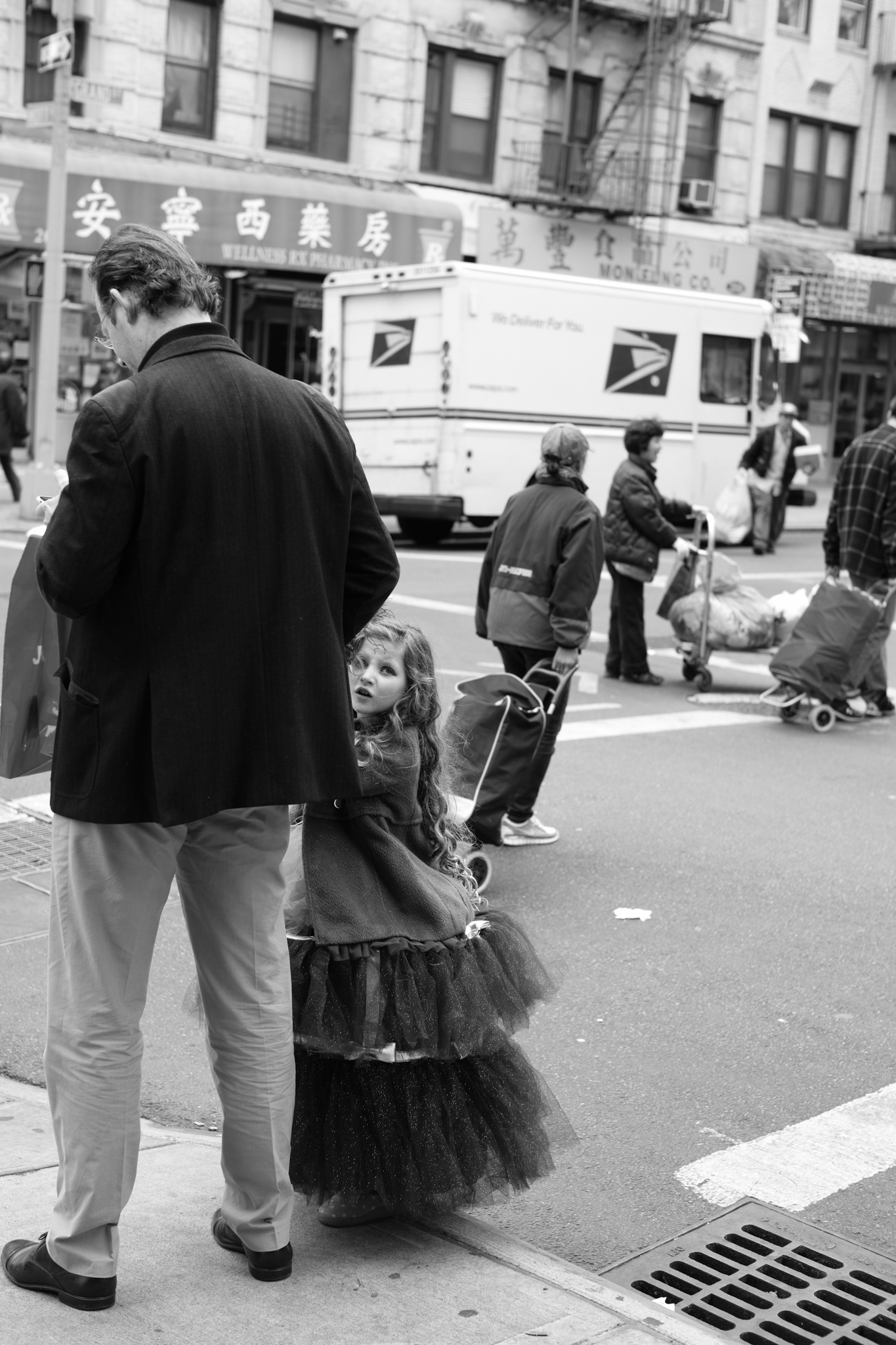 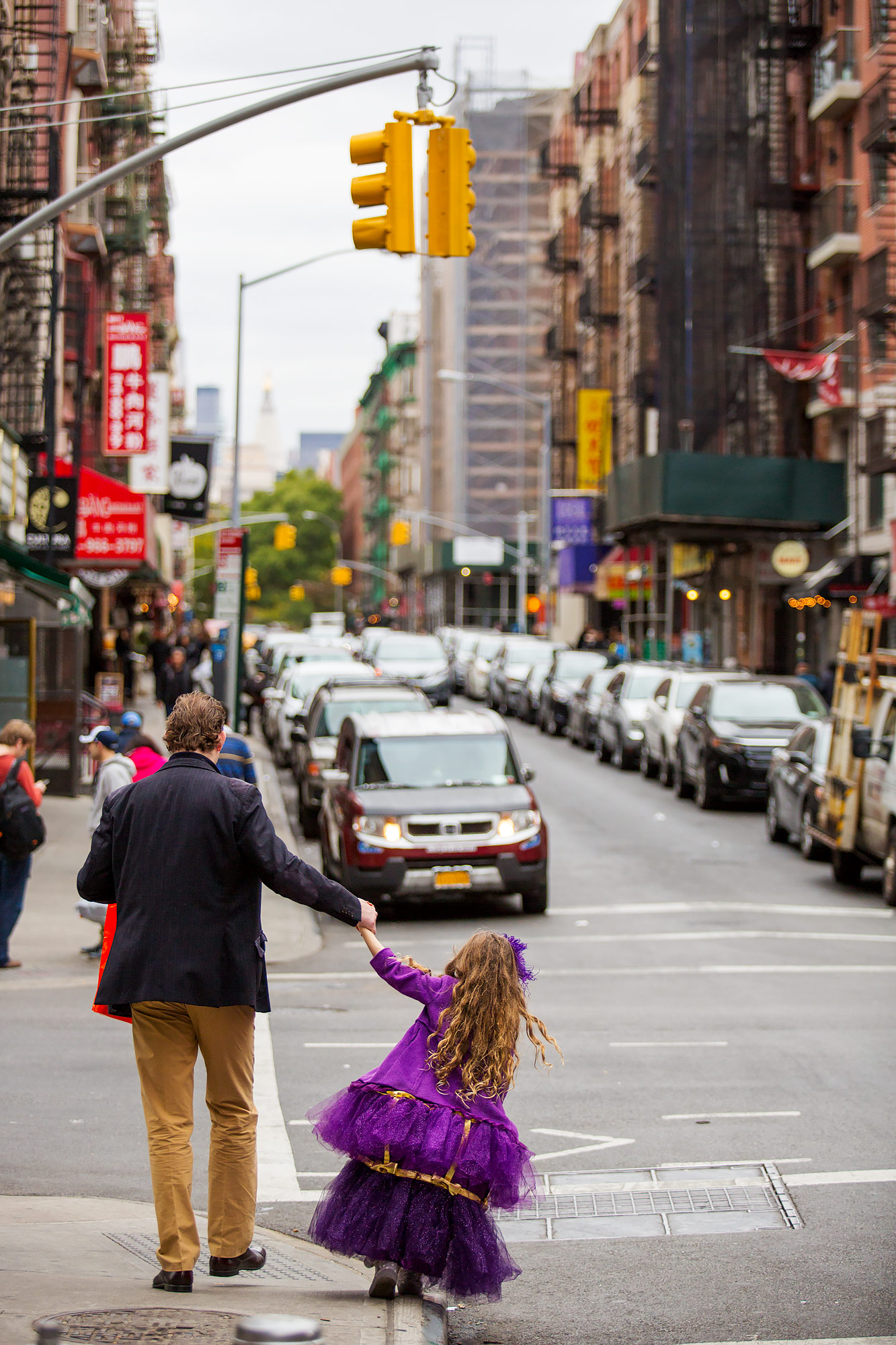 When I got back home, I looked carefully at my photos. I realized that there’s no consistency in them. It seems I capture what’s interesting with no specific goal or subject type in mind. I’m not one to practice “name dropping”, but my shots started to look like images from well-known photographers. For example, “Costumed Conversation” looks like something Joel Meyerowitz would have taken… 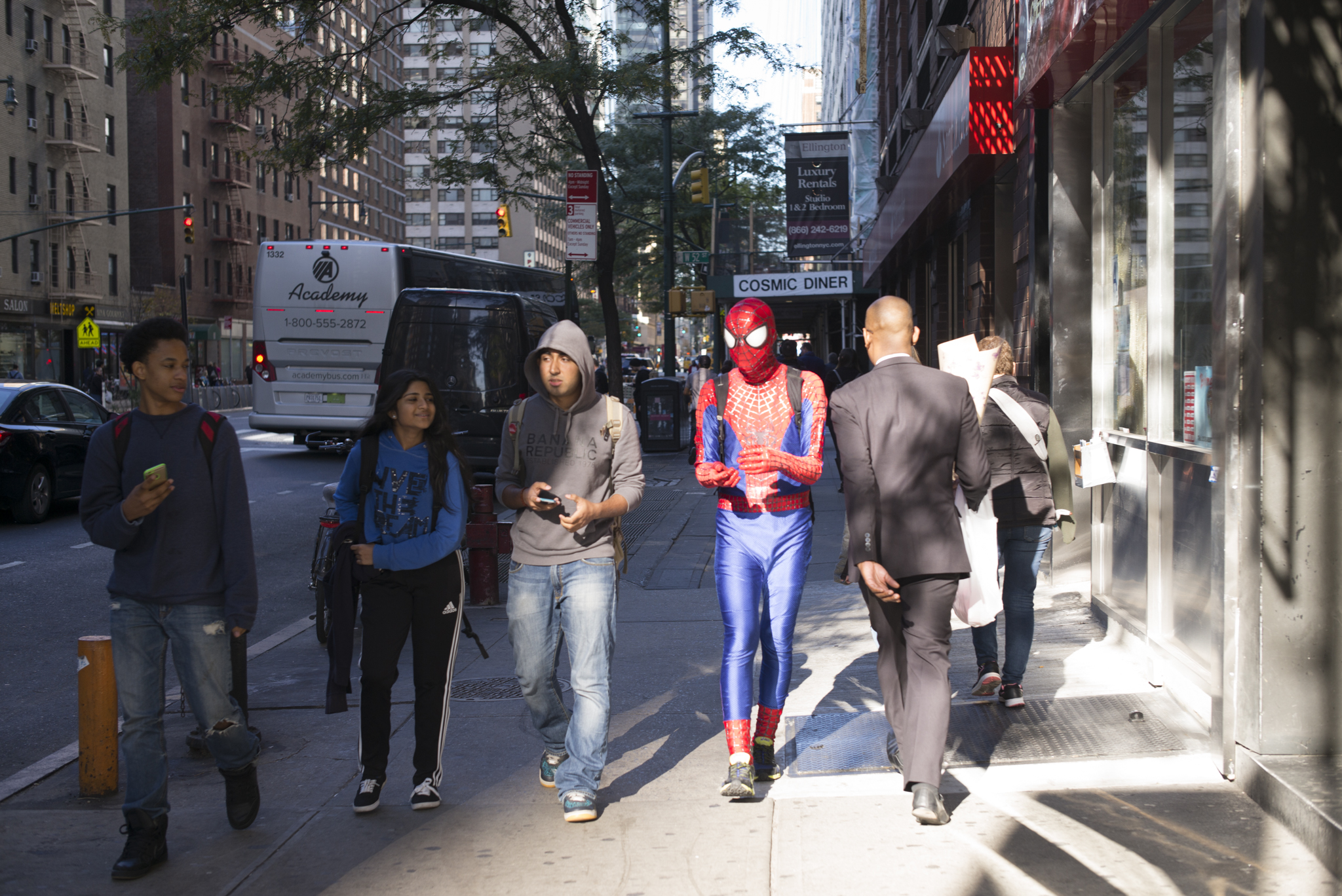 Meyerowitz tries to capture not necessarily the “decisive moment”, but a moment in time where he shows interaction in the scene as a whole. In “Costumed Conversation”, we see a person dressed in a costume, perhaps for no reason other than to turn head, though, it was late October, and then there’s a man in a suit not phased nor distracted by that fact, but fully aware of the costumed guy to avoid running into him within inches. This image only works in color, only because it adheres to the “color hierarchy” mentioned by William Eggleston: where the costumed figure demands more attention than the other colored subjects. So not only does the guy want attention, he’s getting it, in this photo, just by being! It’s almost Sartre-like. The little girl’s expression in “Purple Dress” reminds me of the types of expressions Diane Arbus would capture.

I also noticed a bit of Bruce Gilden in “Fast Talker”, minus the obtrusive camera and flash in the subject’s face. This guy was selling something to unsuspecting people. I wasn’t sure what it was. 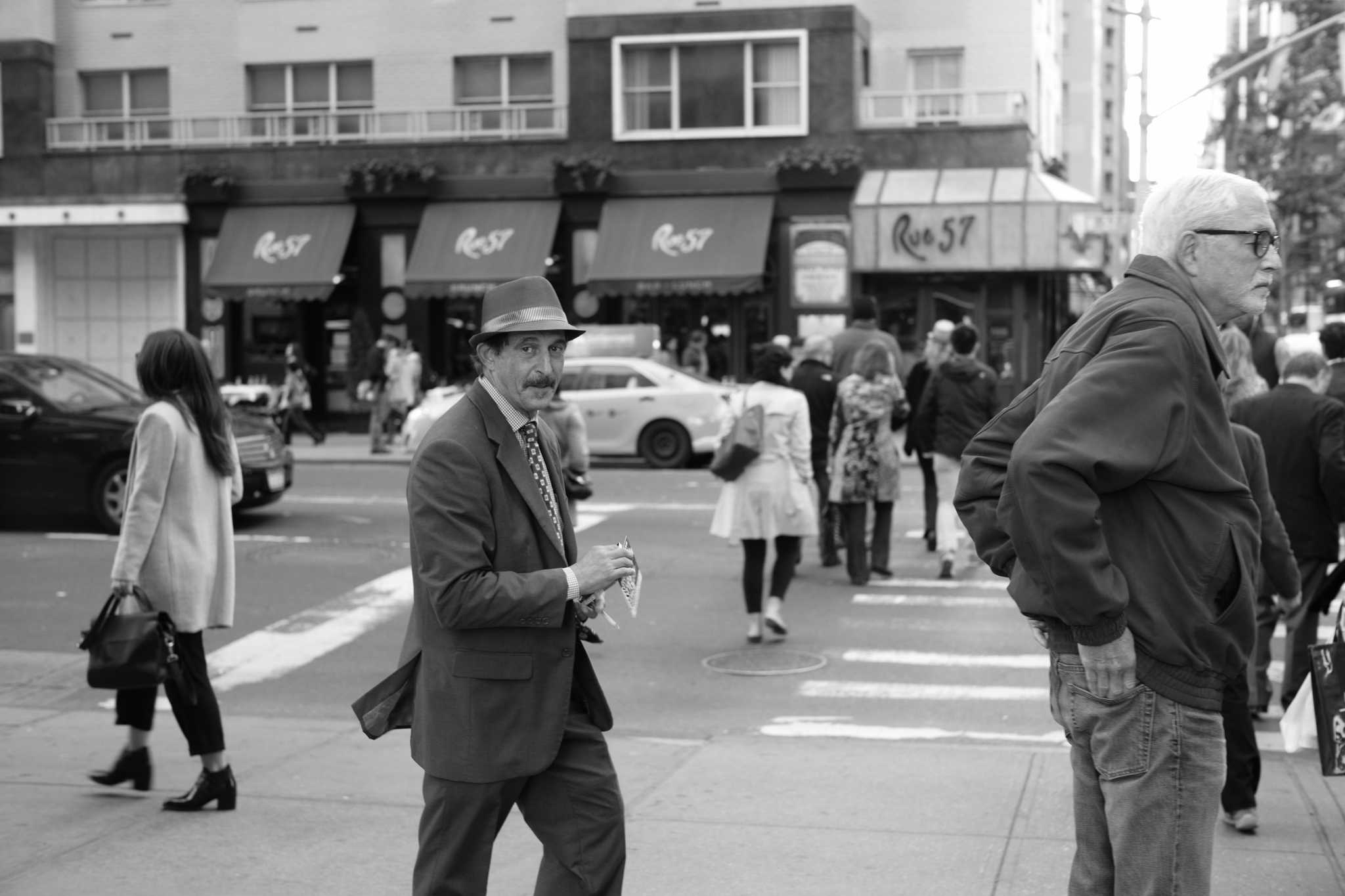 or a bit of Garry Winogrand… 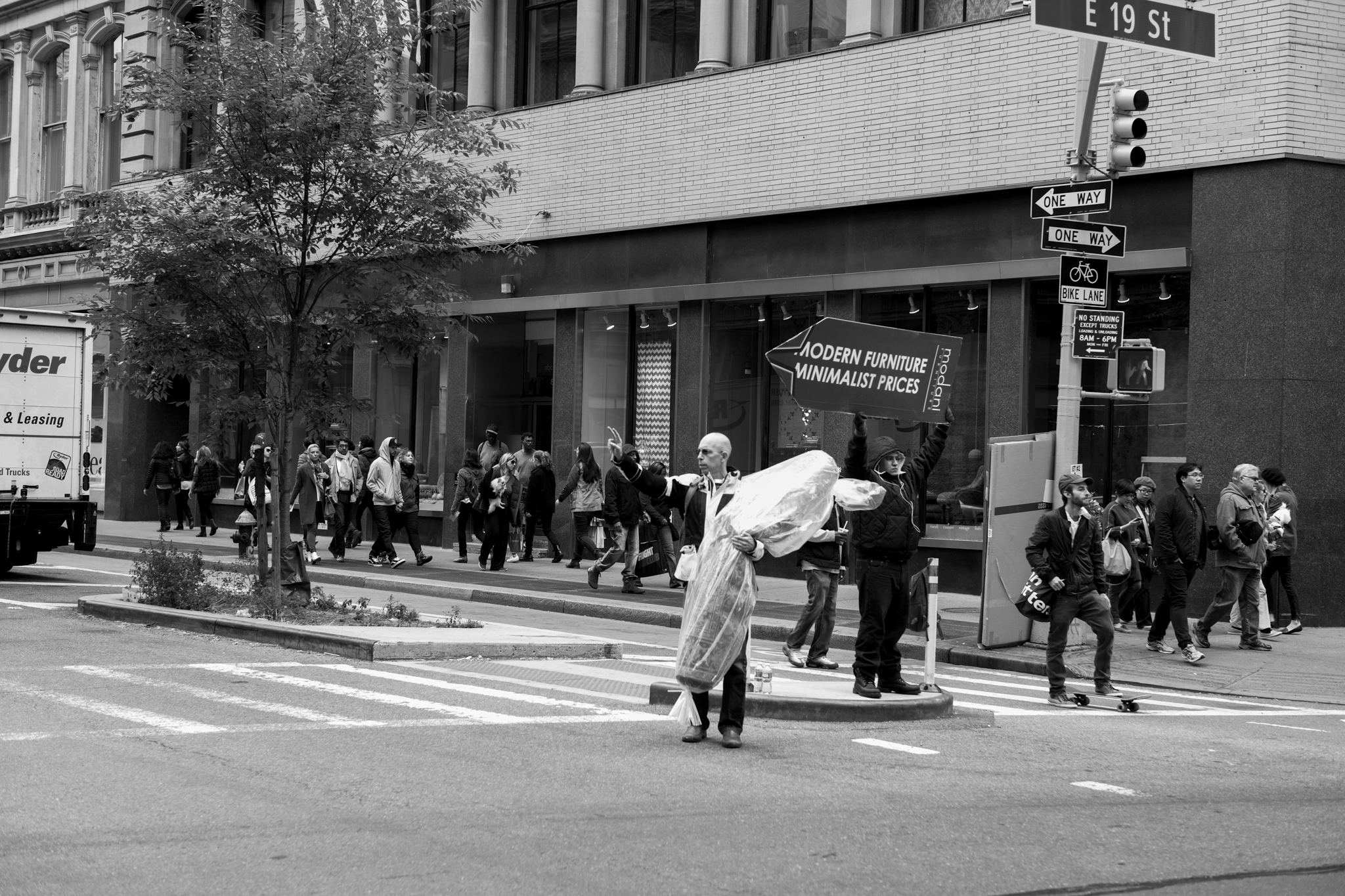 I guess either I’ve been influenced by these photographers or these subject keep popping up. A “rhetorical conjecture”, nonetheless. But one thing of note: these photographers got even closer to their subjects than I did (unless they are crops). Even before I took these photos, I knew that I had to get uncomfortably close. To my surprise, not many people noticed me. 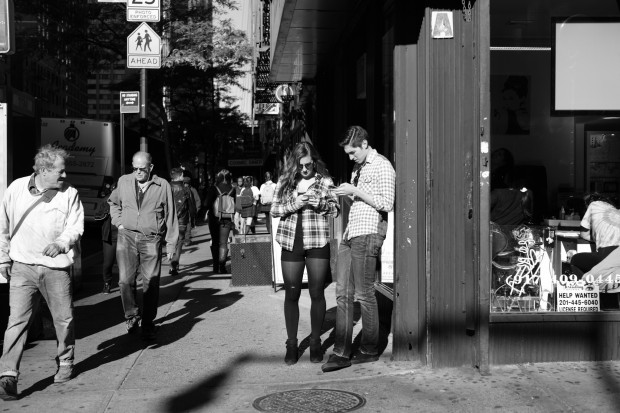 “The Looker”. Leica M-P, Summilux 50mm. This is the first frame of three. I was walking up to the couple as I was pressing the shutter. Though is not the shot I wanted, it turned out to be the most interesting.

But we’re talking about inspiration, or the lack of it, and I guess these images are the reason: they are cliché, and it is this knowledge that makes finding inspiration more difficult. At least, for me. Then I think of the thousands of photos we haven’t seen by the “well-known”. So perhaps inspiration should not be the driving force, but perseverance. Come to think of it, these are, essentially, Sam Abell’s words.

Going back to our individual styles, Matt’s and my choice of gear, obviously, was a factor of how our images turned out. There were times where I thought I could achieve a certain look (which I thought I succeeded based on my camera’s LCD), but the contrary was revealed once viewed on a computer screen. “Toddler in Chinatown” is one such instance. I wanted the toddler to be a bit more separated from his environment, while “placing” him in the environment. Here’s where a zoom lens would have worked better, by “compressing” the scene more, though it would most likely have less of the scene. 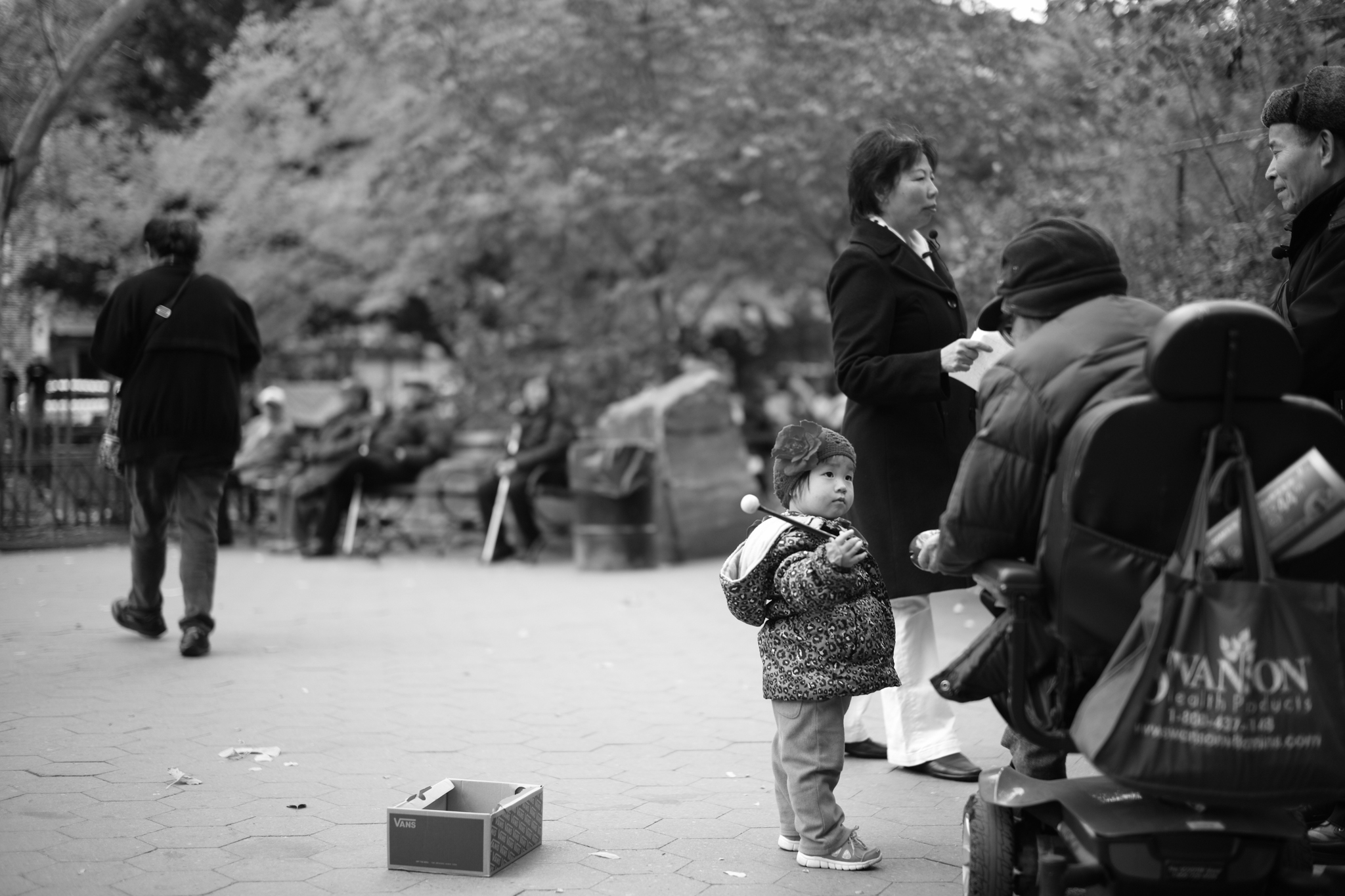 Unless I’m shooting portraits, I like to place my subjects in a scene. I like to set the stage for why my subject is doing what it’s doing. I use the term “subject” loosely. It’s actually an ambiguous term for me. My “subject” is the whole scene. One day, my neighbor approached me while I was taking pictures and he asked “Taking pictures of birds?” Without losing a beat, and very seriously, I replied “No. I’m taking pictures of trees with birds.” Not realizing what I said.

Talking about the broad term “style” can encompass many hours, days and even years. So I don’t expect to cover it in this post. Instead, I’ll leave you with my selection of my photos from this endeavor of finding inspiration, and perhaps a short description where necessary. Otherwise, I’ll leave you to discover what makes those images pleasing to me.